59 Main Street was owned by the Education Dept. and was the residence of the Head Teacher of the Greytown District High School (as the Greytown School was then). That is how I came to be there as the Head Teacher was my father, Geoffrey Foote. I guess you will know when my parents were there and living in the house through the school records. The years that I was living there were 1950 -1952.

The house was a large villa, painted white, with a veranda along the front facing Main Street. There was a central hallway with a doorway halfway along the hall. The two rooms facing the veranda were bedrooms used by my parents and my Grandfather who lived with us. The other two bedrooms were on the left of the hallway going towards the kitchen and the lounge was on the right with windows looking out on the lawn and garden on the Jellicoe Street side of the house. At the eastern end of the house was from North to South - family room, kitchen, kitchen storage, and bathroom. The family room, lounge and the two front bedrooms all had fireplaces.

The sheds in the back yard housed firewood, laundry etc with the garage behind them. The garage had access from Jellicoe Street past a large, high, square hedge between the driveway and the house, screening the back yard from Jellicoe Street. Beyond the garage was a hen house and run and a very large vegetable garden - I guess this is the part that you refer to as "the land next door".

We also used the part of the section between the house and the northern fence line as vegetable garden.

Diagonally over Main Street was the Post Office with the town clock on top. We wondered how we were going to cope with the loud clock sounds but it was not long before we didn't notice it. Straight across Main Street was the Catholic church and on the other comer was another church, I think Methodist. Ours was the only house on our side of Jellicoe Street between Main Street and East Street.

The Town Hall was the centre of social activity, being the picture theatre, dancing venue, live theatre. Ever one knew everyone else. There was a lively tennis club that used the courts at Memorial Park where I learned to play tennis. Likewise the swimming club with its pool at the southern end of the town met regularly for competitive swimming. 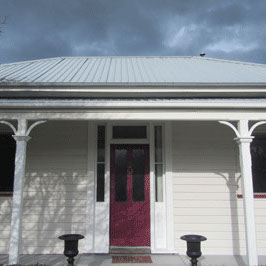 There was no shortage of summer holiday jobs - orchards, haymaking, freezing works etc.

An example of the way the town worked was provided by the way the local Traffic Officer handled my application for my first driving licence. When I fronted up he said to me, “Your father wouldn't have sent you here if you weren't ready for this". He then proceeded to process my driving licence without a test of any sort. So much was done on trust those days.

I have very happy memories of my time in Greytown and your request has given me the opportunity for pleasurable reminiscing - thank you.

(Greytown Heritage Trust has been unable to contact Roger Foote. We would appreciate information about him.)